Last year, 2015, marked the twentieth anniversary of disruptive innovation – introduced to the world by Clayton Christensen in 1995.  Over the past two decades, many companies and makers have targeted the creation of new-to-the-world products.  This has resulted in a number of approaches that are all disruptive in their own way.  At this time, nine different techniques for achieving breakthrough innovation exist. 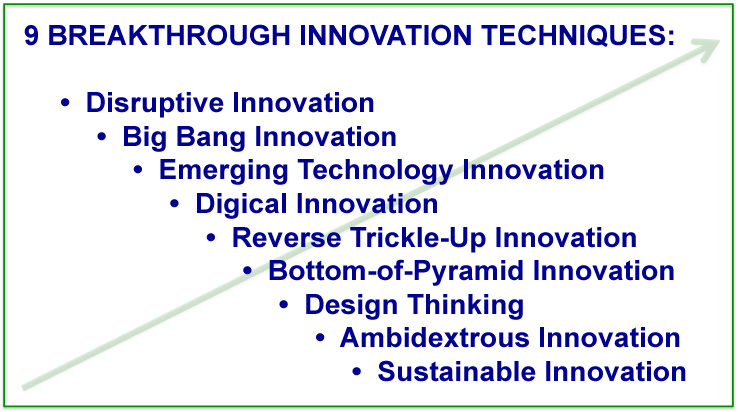 Breakthrough Innovation: Nine Techniques [Machine Design – May 2016] gives a one paragraph description of each technique and provides active links to selected sources and writings for the reader to explore.

TRIZ is an innovation technique that professionals systematically apply according to a defined set of principles. Originally developed in Russia by Genrich Altshuller in the 1940s, TRIZ took a number of years to cross the ocean and become available in English. By the early 1990s, TRIZ gained a foothold in the U.S. and slowly began spreading globally from its Russia and USA “centers of excellence.” TRIZ is now practiced in at least 50 countries.

TRIZ is likely the most powerful innovation tool on the planet, and has been for the past twenty-five years. Altshuller set out to identify the common inventive principles that run across patents.  After examining a sample population of forty-thousand patents, he identified “76 Standard Inventive Solutions.”  As well, he found there are only “39 Characteristics That Technologists Seek To Optimize” and only “40 Inventive Principles To Optimize Characteristics.” Altshuller reduced many of the acts of innovating to a systematic process.

Rubbish you say?  Over the past twenty-five years others have analyzed larger sample sizes of up to two million patents. The new findings were not significant enough to change Altshuller’s published works.

Why hasn’t TRIZ become more prevalent at this time?  There are several possible reasons, and the answer is likely a combination of them.  With origins in Russia, and most of the world’s original experts coming from Russia, TRIZ didn’t hit western civilization with a running start.  The methodology is also complex.  Few westerners look at a rule-driven 39×40 matrix and want to dive in.  There is also a significant amount of time to learn the process to reasonable proficiency, about the same time it takes to become a six-sigma black belt.  And, until the past ten years, the priority across industries was supply chain optimization and operational excellence.  Innovation, in the big picture of time, is only recently at the top of the list – except for a blip in the late 1990s. 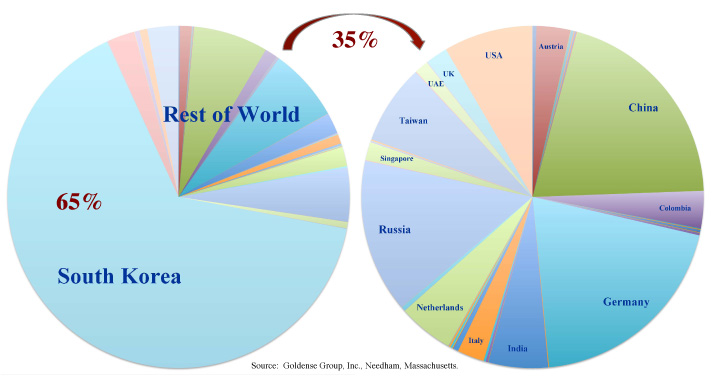 There are a handful of companies in the USA that each have hundreds of people practicing TRIZ.  That is a huge number.  Why haven’t we heard anything about it?  Because TRIZ is giving them a tremendous competitive advantage. Employees are discouraged to discuss the subject outside of the company, never mind to present their work at conferences.  TRIZ does not have a Jack Welsh that is going to get his company ahead first, then bring his best practices to the world.  Absent a Jack Welsh, TRIZ risks being just another tool in a long list of tools – except in Asia where its value is quickly being understood.

There are TRIZ-inspired designs all around us, but no one talks about it for competitive reasons.  If you have held one of those new water bottles that has a waistline and a much smaller cap, and uses half the plastic, you are holding a TRIZ-based design.  It seems a bit flimsy because we have become used to sturdy water bottles, but it stands the drop test like the cylindrical bottle with twice the plastic.  Imagine the cost reduction if you are a bottle manufacturer.  And, less water bottles slip out of one’s hand.  This thought process is now making its way into laboratories where dropping bottles can be a real problem.  The old fashioned cylindrical beaker, with the single lip at the very top, may eventually go the way of the dinosaur.

GGI has been following TRIZ, and its several manifestations in processes and logic engines for software, since the early 1990s. By the early 2000s, enough of Altshuller’s work had been translated and TRIZ became generally available to western companies.  In 2008, GGI researched the penetration of 67 innovation tools and included TRIZ.  Next to the usage of the USPTO web site and the use of internal wikis, TRIZ was the third most used technique of the 67 techniques we researched. The CTO of Invention Machine, one of the software companies with TRIZ underpinnings, had been speaking at GGI’s Summits since 2005 which continued until IHS in England purchased IM.

The Altshuller Institute for TRIZ Studies (Worcester, MA) found out about our research and our long-time interest in TRIZ about a year ago.  They invited us to keynote the annual USA TRIZCON2016 conference which was just held March 3-5, 2016 in New Orleans.  To prepare for TRIZCON2016, we performed original research on the global adoption of TRIZ since its translation into English twenty-five years ago.  We were told at the conference that our research was new-to-the-world, and was previously only anecdotally understood by a handful of people.

TRIZ Is Now Practiced In 50 Countries [Machine Design – April 2016] focuses on the rapid global adoption of TRIZ, which grew at a compounded annual growth rate of 40%, during the past decade.