When a company’s innovation levels are high, or a company’s innovation levels are low and not recognized as being low, GGI has suggested that our clients and customers enter into an award contest.  In the former case, a win creates lovely price premium and brand value opportunities for several years.  In the latter case, competing can be calibrating to both management and to the members the cross-functional product development community.  Benchmarking company products provides learning opportunities up and down the ladder.

There are many award competitions around the globe each year.  Regardless of the purpose or the type of award, there are none as prestigious as the annual R&D 100 Awards – excepting possibly a Nobel Prize.  The R&D 100 Awards are now produced by Advantage Business Media [ABM].  ABM has become one of the publishing powerhouses in the scientific and engineering community with a portfolio of some twenty-five trade publications across the fields of communications, design, manufacturing, and science.  R&D Magazine is among its most prized assets and is the originator and long-time home of the R&D 100 Awards.

As a subscriber to R&D Magazine since the early 1990s, I had followed the results most years and of course when GGI’s clients competed.  But, I had never been to the actual awards ceremony.  The bottom line is that everyone should go to the R&D 100 Awards Dinner at least once in their career.

Two things were different this year.  First, ABM decided to produce a two-day conference preceding the Awards banquet on Friday evening.  The 1st Annual R&D Technology Conference had four tracks and attracted over two hundred registrants.   Tim Studt, R&D Magazine’s renowned editor of several decades and the chief architect of the R&D 100 Awards and annual R&D Funding Forecast, asked me to speak on how the complexity of managing R&D will increase in the next decade.

The second thing that was different, was that for the first time in 53 years since the awards began, the winners were not announced in advance.  You may imagine that there were a good number of people bursting with anticipation throughout the conference and right up to the end of the Awards banquet Friday evening at 10:30 PM.

A black tie event, the Awards banquet did not disappoint.  Held at beautiful Caesars Palace in Las Vegas, guests were first surprised by the entrance to the ball room.  There was immediate curiosity as to what might await as one passed through the gateway. 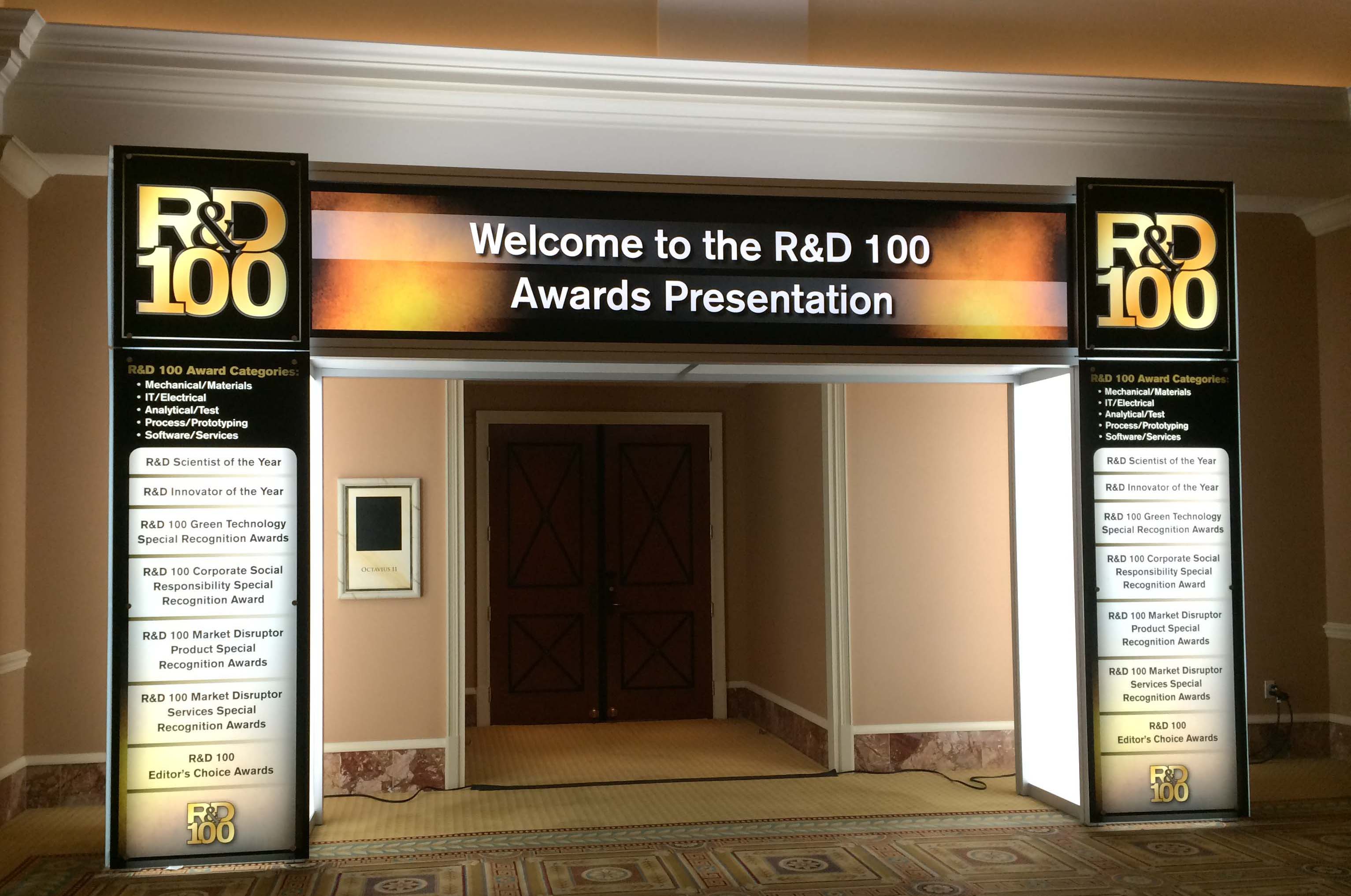 As I mentioned, the R&D 100 Award winners were not announced in advance.  After a nice dinner, the lights went out and on came the spotlights.  ABM had orchestrated the event to the level of the Emmy Awards.  There were spotlight instructions identifying where every winner sat at every table in sequential order; for all 100 winners and for the approximately twenty five extra awards that were presented that evening.  The only thing missing was the TV cameras. 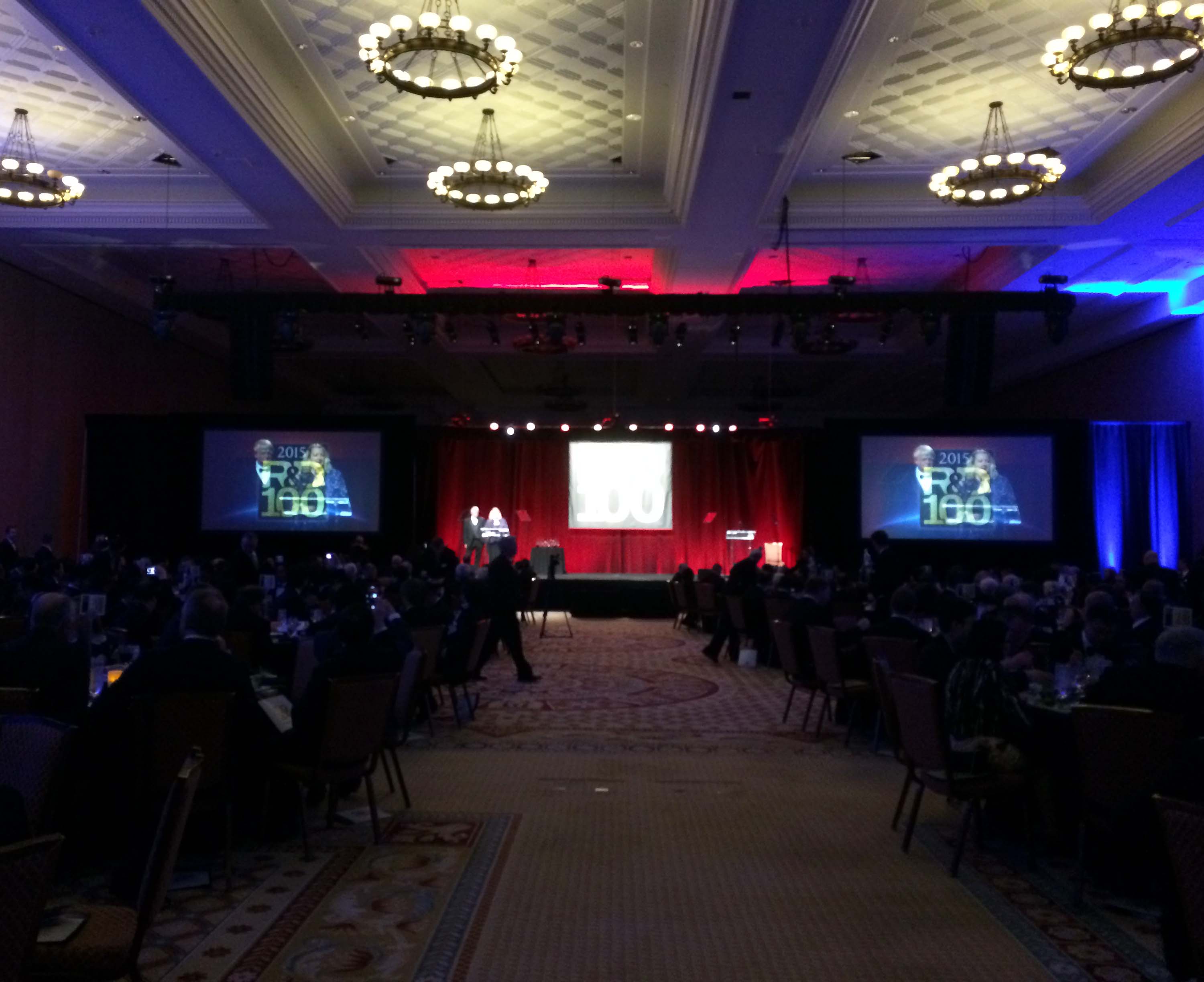 Tim Studt and Bea Riemschneider hosted the evening.  Bea is the Editorial Director of Advantage’s Science Group. The Science Group includes R&D Magazine and ten other science and medical publications.

The largest group of winners were the United States National Laboratories and NASA.  Collectively, they took home over thirty awards and were listed as contributors to a dozen more companies that won.  A number of these awards, notably from Oak Ridge National Laboratories, were for advances in 3D printing technology.

The next big block of winners came from companies who all shared the word “Dow” in their names.  “Dow companies” took home seven awards.

The third big block, consisting of four awards, was from Taiwan ROC’s Industrial Technology Research Group [ITRG].  One of these awards will be seen shortly in all our fire departments.  ITRG created an impeller that goes in line before a fire hose’s nozzle and spins with the flow of water.  The spin generates electricity which is captured to power a new spotlight attached to the nozzle.  Whenever the hose is used, the light shines on the target.

Several universities also won awards. Another possible game-changing product came from the University of Central Florida.  They have patented an electrical power transmission cable that transmits power, that also has an outer concentric cable that acts as a battery to store power.  The power cable and the battery are one unit.  There are implications for many industries.

Finally, and please pardon me for this, but I counted roughly twenty companies as the night proceeded that had participated in GGI’s Innovation or Metrics Summits some time in the past 5-8 years.  My thought was that many of these innovation-hungry companies must do a methodical assessment of what was available to be learned on the subject as part of their effort to innovate.  GGI’s next Summit is December 8-10, 2015, the 13th R&D-Product Development Innovation Summit.

Let’s consider for a moment the corporate journey to improve innovation that has taken place, and where we are now.

Productivity improvement was driven into logistics in the ’70s and ’80s, into manufacturing and operations in the ’80s and ’90s, and into the supply chain in the ’90s and ’00s. As a result of those efforts, companies that create and commercialize products achieved the lion’s share of their improvement entitlements in the “downstream half” of the company.

Improvements in R&D and product development, beginning in the ’80s and extending to the ’00s, similarly focused on productivity via improved execution by striving for faster time-to-market and speeding-up product life cycles. By the early ’00s, companies could foresee that the opportunity for big improvements was also nearly exhausted. The only place to look for the next big opportunities was further upstream in the company.

In the early 2000s, companies began focusing on pushing the best possible portfolio of products through their fairly well optimized development and operations pipelines. The quest for higher-value, more-innovative portfolios began.

But alas, one commonality among the past three decades of improvement initiatives was that they primarily focused on improving the bottom line. Profit is no small thing, granted, but 30 years of corporate focus on the bottom line left many companies challenged to attack top-line initiatives with the same vigor and expertise.

The Journey to Mastering Innovation [Machine Design – November 2015] makes the case that the next great source of competitive advantage will accrue to those companies that master the ability to innovate, not innovation=execution but rather innovation=creation. 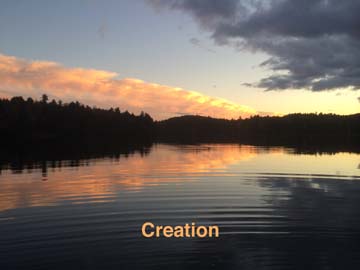